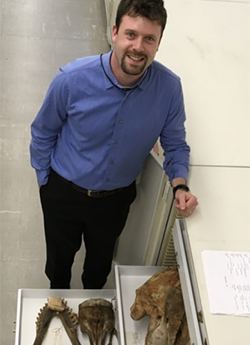 Dr. Michael A. Verney grew up in the woods of western Massachusetts, where he cultivated a love for history, exploration, writing, and the natural world.  He earned his B.A. in History at the University of Massachusetts Amherst in 2008.  In 2009, he enrolled in the Graduate School at the University of New Hampshire (UNH), where he received his M.A. and Ph.D. in History in 2011 and 2016, respectively.  Between starting college and graduating with his doctorate, he also worked at a documentary film company, a historic house museum, two academic archives, and a replica War of 1812-era privateer.

Dr. Verney’s research examines the global history of the early American republic with a focus on empire, intercultural encounters, and oceanic expansion.  The Journal of the Early Republic published his first scholarly article, “An Eye for Prices, an Eye for Soul: Americans in the Indian Subcontinent, 1784-1838,” in the autumn of 2013.   In 2017, this article was republished as a book chapter in India in the American Imaginary (Rajender Kaur and Anupama Arora, eds., New York and London, 2017).  His dissertation at UNH examined the maritime and global face of the era of “manifest destiny” through the exploring expeditions of the antebellum U.S. Navy.  U.S. governing elites sought to use naval exploration to gain cultural and diplomatic recognition from European powers as well as to advance a diverse imperial agenda, including commercial, religious, scientific, and proslavery interests.  In 2017, Professor Verney’s dissertation was the runner-up for the Allan Nevins Prize from the Society of American Historians and a finalist for the Society for Historians of the Early American Republic (SHEAR) Dissertation Prize.  During academic year 2017-2018, he was a Baird Society Resident Scholar Program Fellow at the Smithsonian Institution Libraries in Washington, D.C., and a National Endowment for the Humanities Postdoctoral Fellow at the Library Company of Philadelphia.  His book project, entitled “‘A Great and Rising Nation’: American Naval Exploration and the Forging of a Global Maritime Empire, 1815-1860,” is under contract with the University of Chicago Press.

Professor Verney teaches courses in colonial North American and United States history.  He is passionate about bringing history to life in the classroom and in the public sphere.  He would be delighted to advise students interested in pursuing public history internships in the Springfield area and beyond.  He would also welcome any students who would like to assist him with his book by conducting original research in the early history of global U.S. expansionism.  Sample topics might include Congressional politics, maritime history, the Pacific World, the U.S. Navy’s antipiracy operations, the history of the book, and the founding of the Smithsonian Institution.  When not teaching or researching, Dr. Verney loves to travel, journal, watch movies, hike, sail, surf, fish, and spend time with his family.