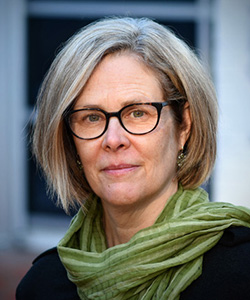 Dr. Weddle’s research focuses on the experiences of women in early modern Italian cities. She has published widely on Florentine and Venetian convents, including an edited translation of Sister Giustina Niccolini’s Chronicle of Le Murate (CRRS Iter, 2011), and the co-edited volume (with Marilyn Dunn) Convent Networks in Early Modern Italy (Brepols, 2020), as well as several articles in edited books and academic journals. Her current research project, Beyond Rialto: A Spatial History of Sex Work in Early Modern Venice focuses on themes of segregation and mobility. It relies upon archival sources and deploys digital mapping to examine the everyday spatial practices of Venice’s sex workers, and to analyze the ways in which the built environment conditioned their encounters and activities. This research has been supported by grants and fellowships from the Gladys Krieble Delmas Foundation, the Samuel H. Kress Foundation (Renaissance Society of America), the Andrew Mellon Foundation-Washington University in Saint Louis Divided Cities program, the Clark Art Institute, the National Humanities Center, and the National Endowment for the Humanities.

Dr. Weddle has contributed to academic societies in multiple roles. She served on the editorial boards of the Journal of Architectural Education (2008-2010, 2014-2017) and Architectural Histories, the journal of the European Architectural History Network (2012-2017). She was a member and chair of the College Art Association’s jury for the Charles Rufus Morey Book Prize for best publication in art history (2017-2019), and served as a member of the Fellowships Committee for the Renaissance Society of America (2015-2017).