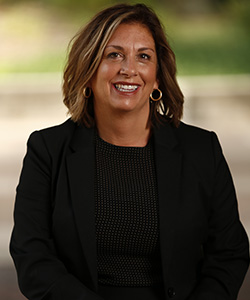 Dr. Shelley Wolbrink has been a history fanatic her whole life. She received her Ph.D. from the University of Cincinnati in 1998, the year that she began teaching at Drury. She teaches pre-modern history classes such as Ancient Civilizations; Medieval Europe; Renaissance and Reformation; and Atlantic History, 1400-1800. Topical courses include specialized classes on the Witch-hunts of Early Modern Europe; Joan of Arc in Film and History; and the Black Death. Favorites primary texts include The Song of Roland, The Letters of Abelard and Heloise, and Suetonius’ Twelve Caesars. She also teaches Core 101 (“Knights Templar”) and Core 201 (“The Making of India: Women and Gender”).

Dr. Wolbrink’s research focuses on women and monasticism in the twelfth century, particularly the Premonstratensian monasteries of northwestern Germany. In 2009, she was invited by St. Norbert’s College and the Institute of Norbertine Studies to serve as convocation speaker during Heritage Days.  Publications include: “Necessary Priests and Lay Brothers: Male-Female Cooperation in the Premonstratensian Women’s Monasteries of Meer and Füssenich, 1140-1255,” in Partners in Christ: Men, Women, and Religious Life in Germany, 1100 – 1500, ed. by Fiona J. Griffiths and Julie Hotchin (Brepols, 2013) and “Women in the Premonstratensian Order of Northwestern Germany, 1120-1250,” Catholic Historical Review 89: 3 (July 2003): 387-408. Her essay on the Premonstratensian order appears in Women and Gender in Medieval Europe: An Encyclopedia (2006).   She served as the editor for the two-volume Dictionary of World Biography: The Middle Ages, 457-1453 (Salem Press, 2005). Encyclopedia entries include: Mary Ward; the Therigatha; Clovis; St. Benedict of Nursia; St. Angela of Foligno; Balthasar Hubmeier; and Pope Boniface VIII.  Conference presentations include the American Historical Association, the Mid-America Conference of History, the International Congress of Medieval Studies, and the International Medieval Congress in Leeds, England.

Dr. Wolbrink has led study abroad trips to Greece, Morocco, and Egypt. She has been taking Drury students to Rome in May and June for over a decade, still enthralled with the history and beauty of the Eternal City.  Dr. Wolbrink serves as director of the Medieval and Renaissance Studies program, a fifteen-hour multi-disciplinary minor program at Drury. She has served as chair of the Division of Social Sciences; chair of the Promotion and Tenure committee; chair of the Department of History, and as adviser for Phi Alpha Theta, the history honorary. For fun, Dr. Wolbrink travels, enjoys good food, and keeps up with the Middle Ages in popular culture. Please stop by her office for research advice, travel postcards, history cartoons, or visual images from the past, including the well-preserved body of St. Margherita of Cortona and the Mona Lisa (wearing headphones, of course).