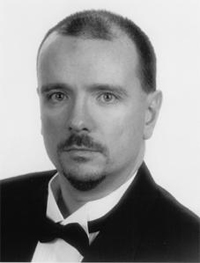 Stephen Bomgardner combines an active singing career with a full-time teaching career. On the concert stage, he has performed over 130 solo and chamber music recitals in Boston, Minneapolis, Seattle, Los Angeles, Houston, and numerous other cities across the United States. In opera, his professional repertoire includes thirty-nine character tenor roles such as the Witch (Hansel and Gretel), Vasek (The Bartered Bride), and Major General Stanley (The Pirates of Penzance). A Resident Artist with Springfield Regional Opera, he has performed in 15 productions in the past 13 years, including the roles of Vanderdendur (Candide), Vogelsang (The Impresario), Monostatos (The Magic Flute), Rodrigo (Otello), Basilio and Curzio (The Marriage of Figaro), the Counselor (Trial by Jury), King Kaspar (Amahl and the Night Visitors), Goro (Madama Butterfly), Mr. Erlanson (A Little Night Music), Spoletta (Tosca), and three SRO gala concerts.

He is Professor of Music and Chair of the Department of Fine and Performing Arts at Drury University where he teaches voice, lyric diction, vocal pedagogy, and music history. In academic performance, he has given 45 lecture recitals at regional and national music conferences of the College Music Society and the Texas Music Educators Association. These include lecture recitals on songs by Stravinsky, Britten, Haydn, Chopin, Mussorgsky, Finzi, Wolf and Copland.