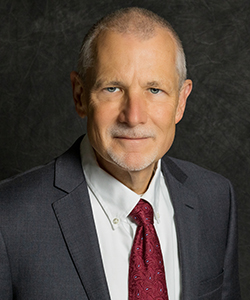 W. Allin Sorenson is the Dean of the School of Communication, Fine and Performing Arts and Professor of Music specializing in voice and choral studies. He was the Director of Choral Activities for 28 years and Department Chair of Music and Fine and Performing Arts for 12. He holds bachelor and master degrees in Music Education from Truman State University. In 1988, he completed a doctorate in Voice Performance from the University of Minnesota – Twin Cities, where he participated in developing curriculum for undergraduate class voice and vocal pedagogy courses. He has appeared as tenor soloist with the Springfield Symphony and Mid-America Singers and as a recitalist throughout Missouri and the upper Midwest.

Sorenson’s choirs have performed throughout the United States and in Europe, including frequent performances at the Missouri Music Educators Conference and at the Southwest Division of the American Choral Directors Association. His choir performed in Carnegie Hall in 1994, and again in 1999 under his direction to perform the Fauré Requiem with the New England Symphonic Ensemble. His choirs frequently tour internationally with performances in the Netherlands, France, Germany, Austria, Scotland, England, Italy, China, Greece, Turkey and Scandinavia.

Sorenson is an active church musician clinician, adjudicator and is known throughout the region as an expert in vocal pedagogy. He is married to Ruth, a retired music teacher, and they have two daughters, Deanna and Lora.