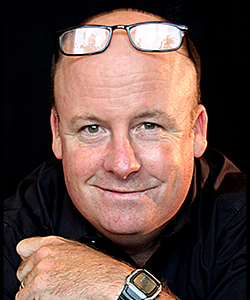 Brian is a video producer and editor with nearly 30 years of professional experience. After graduating from the University of Central Oklahoma in 1986 he took a reporting position at KFSM-TV in Fayetteville, Ark. While there, he won two 1st place awards for investigative reporting from the Associated Press. In 1991 he moved to NBC affiliate KYTV in Springfield, Mo., where he won two Mid-America Emmy Awards for feature and spot news. In 1998, Brian opened his own video production company and since that time has traveled the globe producing videos for clients specializing in corporate marketing. Brian produced an aviation documentary “L Bird, the Little Plane That Did”, a film hosted and narrated by Academy Award winning actor Cliff Robertson.

Brian instructs video production courses and is the advisor for our student-run television station DUTV. Under Brian’s leadership, DUTV is producing magazine and sports shows as well as other special topic programs each semester. DU Uncut, a unique live music program, has aired on PBS affiliates in Arkansas, Kansas City, Oklahoma, Springfield, Mo., and a public access station in St. Louis.