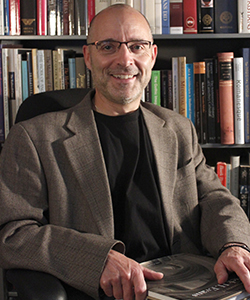 Professor Russo’s teaching interests include ancient, medieval, and Islamic art and architecture, historiography, and women in the Middle Ages. Fusing these interests is his emphasis on an interdisciplinary approach to understanding art in its historical and cultural context. This approach has been formed through his academic work in history and his involvement in archaeology which includes excavations of an early fourth-century Roman imperial complex on the Palatine Hill in Rome, Italy and a twelfth-century medieval townhouse in Canterbury, England.

Russo’s primary research interest is the medieval sculpture of eleventh/twelfth-century England. Since 1991 he has been investigating the sculpture of Lincolnshire County as a research associate for the British Academy ( London) to help create their digital database, The Corpus of Romanesque Sculpture in the British Isles. This database will contain photographs and art historical analyses of all the Romanesque sculpture (1066-1200) preserved in the England, Wales, Scotland, and Ireland. His publications include studies on Romanesque sculpture, Gothic alabaster sculpture, the pedagogy of teaching art history and contributions to the Grove Dictionary of Art. He has presented his research at various venues including the Courtauld Institute of Art ( London), the International Medieval Congress (Leeds), the British Archaeological Association (King’s Lynn), Université Laval (Québec), and the Royal Ontario Museum ( Toronto). In 2000 he was chosen as the Bishop Grosseteste Lecturer at Lincoln Cathedral in Lincoln, England.