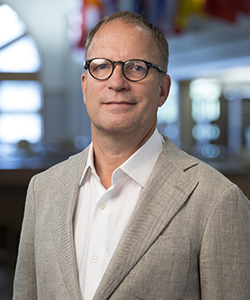 Professor Weddle teaches a broad range of courses including design studios, research seminars, and courses in the history of architecture. He also regularly co-leads study-abroad programs, drawing upon his six years of experience living and teaching in France. Students as well as faculty colleagues have recognized Professor Weddle’s teaching; four times he has been awarded the silver medal from Drury’s chapter of Tau Sigma Delta, the national honor society in architecture and the allied arts, and in 2012 he received the university’s Faculty Award for Excellence in Teaching. He served as Drury’s Fine Arts and Humanities Division Chair from 2005 to 2008, and as Hammons School of Architecture Assistant Director for Academic Initiatives from 2012 to 2014.

Professor Weddle’s research focuses on the formation of French urban design professionals in the mid-twentieth century, as well as on public and professional responses to large-scale urban renovation efforts in Paris during the same period.  He has also conducted research on the employment of design-studio-based skills to deepen and activate students’ engagement with historical questions. His research has been awarded grants from the Graham Foundation for Advanced Studies in the Fine Arts, and from the National Endowment for the Humanities.