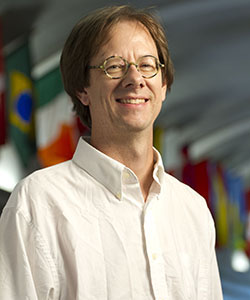 Dr. Brant Hinrichs spent several summers working on high-energy physics experiments at Brookhaven National Laboratory, where the asymmetrical scattering of polarized beam protons on a polarized proton target was investigated. Then, in 1987 it was on to the University of Illinois at Urbana-Champaign for Ph.D. studies in physics. His doctoral research used time series analysis on the signals recorded from the brain of an awake performing pigeon.

He spent two years in Tokyo, Japan as a research postdoc, returning to the states in 1997 to begin a teaching career. He got hooked on investigating how his students learned and didn’t learn, and now, when time permits, does work in Physics Education Research, comparing how students learn and understand microscopic and macroscopic models of physics phenomena. He collaborates on this work with his colleague Dr. Beth Ann Thacker at Texas Tech. He currently is an Associate Professor at Drury, where he teaches the gamut from General Physics to senior-level quantum mechanics.