SPRINGFIELD, Mo., November 8, 2021 — Arkansas Lieutenant Governor Tim Griffin will teach a class at Drury University in both the spring 2022 and fall 2022 semesters.

In the spring 2022 semester, Griffin will teach a course titled Professional Development for Public Service. This course will focus on exposing students to career opportunities and developing professional skills and experiences for public service. During the fall 2022 semester, Griffin will share his expertise via a political science course titled Parties, Elections, and Campaigns. 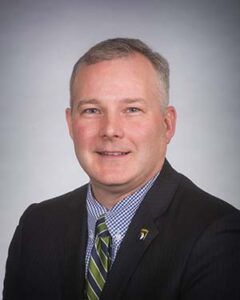 “We are thrilled our students have the opportunity to learn from Lt. Governor Griffin. His breadth and depth of military and public service experience will be invaluable for our students’ education,” said President Tim Cloyd. “I am grateful he is sharing his time and expertise with our university community.”

During the Bush Administration, in 2006-2007, Griffin served as U.S. Attorney for the Eastern District of Arkansas and previously as Special Assistant to the President and Deputy Director of Political Affairs for President George W. Bush at the White House.

Griffin has served as an officer in the U.S. Army Reserve, Judge Advocate General’s (JAG) Corps, for over 25 years and currently holds the rank of colonel. He has served as an active duty Army prosecutor at Fort Campbell, Kentucky and with the 101st Airborne Division (Air Assault) in Mosul, Iraq, for which he was awarded the Combat Action Badge.

He and his wife Elizabeth live in Little Rock with their three children, Mary Katherine, John, and Charlotte Anne. They are members of Immanuel Baptist Church of Little Rock.