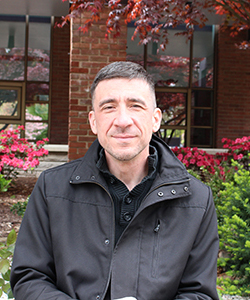 Thanks for visiting! My name is Chris Panza, though students around Drury know me as “CP.” I’m a native of the Bronx, and attended Purchase College for my BA, double majoring in philosophy and literature. After finishing my PhD in philosophy at the University of Connecticut in 2002, I came to Drury – where I am now a professor of philosophy and happily spend my days infecting students with a desire to investigate and grapple with big philosophical questions.

Turning to research interests, although I wrote my doctoral dissertation on John Locke’s philosophy of language (earning a specialization in early modern philosophy), I have developed a long-term scholarly and teaching interest in Confucianism, ethics (particular virtue ethics), and in existentialism. Most recently, I have developed a lively scholarly interest in the subject of intellectual virtues, both in the ways that those virtues are differently interpreted by different historical thinkers and also in the sense that those virtues (however construed) should be a central component of a liberal arts education.

At home, I’m married (to Christie Cathey, a professor of psychology at Missouri State University) and have two awesome kids, Parker (who is 12) and Paige (who is 9). Both of them think philosophy is odd and strange, but I figure I have years to work that out and bring them into the fold. I am also an avid Italian cook and baker, and spend a lot of time perfecting various dinners, breads, and desserts.