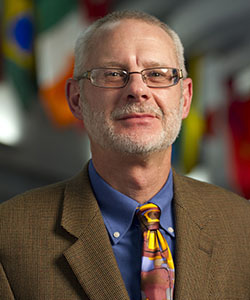 He is the author of Defining Science: A Rhetoric of Demarcation (Univ. of Wisconsin Press, 1996), as well as numerous articles, chapters, and invited reviews on the rhetoric of science. He has received the Karl R. Wallace Memorial Award of the National Communication Association for Scholarship in Rhetoric, and was a finalist for the National Communication Association’s award for Most Outstanding Rhetorical Studies Scholar. He received the Drury University Faculty Award for Excellence in Scholarship in 2000 and the Drury Student Senate’s Outstanding Faculty Member Award in 1999. His scholarly publications focus on the impact of rhetorical phenomena to shape human perception, motivation and action in cultural, political and scientific domains.

As a member of the communication and general education faculty, he has taught the politics of rock and roll, rhetorical criticism, public speaking, communication theory, senior seminar, persuasion and introduction to graduate studies. He has served as a co-advisor to the Drury University Enactus (formerly SIFE) team since 1999, a period during which the team won 15 regional, 3 national and 2 world championships. His heroes are Calvin and Hobbes.