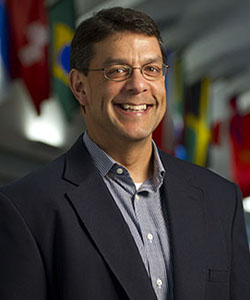 Prior to coming to Drury, Jonathan Groves worked for 14 years as a professional journalist at various newspapers as a reporter, online producer and editor. He spent two years at the University of Missouri-Columbia as the first Reynolds Journalism Institute doctoral fellow studying how online was changing the face of journalism. His research includes publications on online communities and organizational change, and he is co-author of Transforming Newsrooms: Connecting Organizational Culture, Strategy, and Innovation (Routledge/Focal Press: 2020), written with Dr. Carrie Brown. Their paper exploring change at the Christian Science Monitor won the Top Research Paper at the 2013 International Symposium on Online Journalism in Austin, Texas.

Groves has also received acknowledgements for his work with students, including Drury’s 2017 Faculty Award for Advising. In 2018, he became a Scripps Howard Entrepreneurship Institute fellow at Arizona State University to incorporate elements of entrepreneurship into Drury’s curriculum, and was a Disruptive Educator Fellow in 2017 and 2018 at the City University of New York to explore the development and growth of podcasting.

Since 2016, he has served as facilitator for the Community Focus Report for Springfield and Greene County and presents regularly to community groups about the report’s Red Flags and Blue Ribbons. His community work also includes public presentations about social media and misinformation.

He also led the effort to obtain a low power FM license from the FCC for KDRU, Drury’s community radio station that now operates at 98.1 FM in Springfield.

Groves also served as co-investigator for a $15,000 community grant from the Community Foundation of the Ozarks in 2019 to team Drury students and faculty with Grupo Latinoamericano to expand outreach to the Hispanic community in the Ozarks.