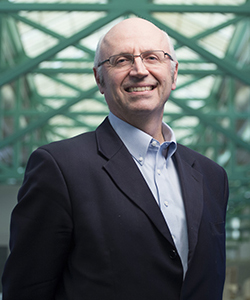 Maurizio Sabini received his professional degree in architecture in 1981 from the Istituto Universitario di Architettura of Venice (Italy) and a post-professional Master of Architecture degree in 1982, with a Fulbright scholarship, from the State University of New York at Buffalo, New York (USA). He then received a PhD in architecture in 1987 also from the school of Venice, where he also taught as an adjunct faculty in the 1990’s. In 1999 he has been a Visiting Professor at Catholic University in Washington DC. He joined Kent State in 2000, where he taught (as Assistant and Associate Professor) and served also in various administrative roles (including Graduate Coordinator and Architecture Program Coordinator) until Spring 2012. From 2007 till 2012 he has been the college International Studies Coordinator, with direct supervision of the architecture & design Study Abroad Program in Florence, Italy. Since July 2012, he has been a Professor of Architecture at the Hammons School of Architecture at Drury University, serving as Director of the School in 2012-13 and 2013-14.

He has taught mainly architectural and urban design studios at both the undergraduate and the graduate level, in addition to graduate theory seminars, various electives, and directing thesis and capstone projects. His student works have been recognized with awards and exhibitions.

He is a registered architect in Italy and an international associate member of the American Institute of Architects. He has practiced for more than fifteen years internationally, primarily in Italy, but also in Africa (Kenya) and Austria. After becoming a full-time educator in 2000 in the USA, he maintained a level of professional engagement through design competitions and consultancies. Various competition entries earned prizes, honorable mentions and were selected for public exhibitions.

His research has mainly dealt with architectural theory, such as his studies on Louis I. Kahn, on “memory” in architecture (culminated in his dissertation), on Dutch “Pragmatic Modernism” and, more recently, on the “critical project”. He has also conducted research on urbanism, such as his studies for the Arsenale of Venice, urban housing, waterfronts and, more recently, on “infrastructure and the just city.”

He has a record of publications (including the Italian translation and critical editing of Learning from Las Vegas) and articles on international magazines, such as Casabella, Rassegna, Domus, Area, AND, The Plan and The Journal of Architectural Education. He has been invited to lecture internationally at various universities, including the University of Trieste, Genoa and the Polytechnic of Milan in Italy, the Escuela Tecnica Superior de Arquitectura de Barcelona, the Accademia di Architettura in Mendrisio (Ticino, Switzerland). He has participated in several international conferences and symposia. From 2006 till 2011 he envisioned and led the annual symposium “The Kent State Forum on the City” at Kent State University Florence (Italy), as a multi-disciplinary platform for study, reflection and discussion on the ongoing transformations of European cities. Bi-lingual proceedings have been published by Alinea, Florence (Italy). Since 2016, he has been serving as Editor-in-Chief of The Plan Journal.