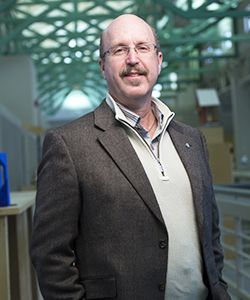 Professor Bruce Moore, one of the founding faculty, is past acting and associate director of Drury University’s Hammons School of Architecture and now teaches in environmental technology and design studios directed toward technology.

A University of Michigan alumnus from the Taubman School of Architecture, Moore has published many articles on various aspects of architecture. He has also given several lectures on environmental and energy technology. He is a consultant to several architecture and engineering firms and agencies including Hunter and Millard, JBall Architects, Dake|Wells, Pellham-Phillips-Hagerman, Butler, Rosenbury & Partners, Architectural Creations, Pentecost Architects, Louisiana State University Center for Energy Studies and Southwest Missouri State University. An active vocal tenor and instrumental trombonist, his specialty is acoustical consultation having worked on the Gittinger Music Building and Theater at the College of the Ozarks and the Exeter Schools Multi-Purpose addition as well as in the capacity of LEED acoustical consultant for a collection of school projects including the Hickory Hills Elementary School and Greenwood Laboratory School Science Wing in Springfield, MO. In addition he is a registered architect with an ongoing practice often partnering with local firms doing such work as the Nevada Performing Arts Center, the Ambler Diversity of Life Facility, the RMMC Office building, the Musgrave Addition to the Springfield Art Museum and the Studio, a Springfield recording facility.

Moore has served as president of the American Institute of Architects for the state of Missouri and the city of Springfield and continues as annual volunteer for AIA National continuing education supervision and review of proposals. Honors include the AIA/AAF Scholastic Award, Tau Sigma Delta national architecture society (to which he serves as faculty advisor for the Drury HSA chapter), the Drury University Faculty Award for Advising and a Springfield AIA design honor awards in conjunction with Butler, Rosenbury & Partners for the City Utilities Training Facility as acoustical and audiovisual consultant and the Gittinger Music Center Theater as acoustical consultant, an AIA Springfield award of merit for the BodyWorks Theater at the Discovery Center and an AIA National Award, as well as a handful of recognitions in national publications, in conjunction with Dake|Wells Architecture as acoustical consultant on the Exeter Schools Renovation and Addition MultiPurpose Space, and Reeds Spring Middle School project with Dake | Wells.