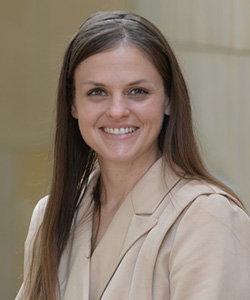 Marie Muhvic is a Midwest native who has spent much of her career in successful fundraising roles at private universities on the east coast. She came to Drury in fall 2021 from Sacred Heart University in Connecticut, where she held roles as president of the SHU Community Theater Foundation and chief development officer for the Jack Welch College of Business and Technology.

Marie began her career in fundraising at the University of Tennessee as a development assistant for athletics. At Princeton University, she was the sole solicitor of annual funds for the school’s 38 varsity and 36 club sports. She was a major gifts officer, associate athletics director and director of athletic development at Fairfield University in Connecticut; and a major gifts officer at St. John’s University in New York City. As vice president of advancement for New England College in New Hampshire, she led efforts to land the two largest gifts in school history and exceeded multimillion dollar comprehensive campaign goals. As a student-athlete, Muhvic was recruited to play soccer at the NCAA Division I and Division III levels.