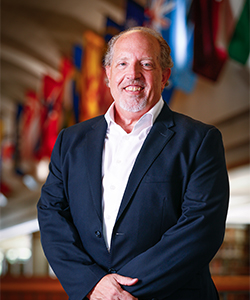 Daniel E. Ponder is the L.E. Meador Professor of Political Science and Director of the Meador Center for Politics and Citizenship. His course offerings include, among other classes, Government and Politics in the United States, Congress and the Presidency, Supreme Court and Constitutional Law, Music, Film, and Politics, Law and Society, and statistical methods for political science, as well as teaching the department’s senior seminar course. He also serves as Pre-Law advisor and is the director of Drury’s Washington Center Program.

Dan has written two books: Good Advice: Information and Policy Making in the White House (Texas A&M University Press, 2000) and Presidential Leverage: Presidents, Approval, and the American State (Stanford University Press, 2018). Additionally, he has written several published book chapters, articles, and essays in journals such as Presidential Studies Quarterly, American Politics Research, Congress and the Presidency, Political Science and Politics, and International Journal of Public Administration. He served as President of the Presidents and Executive Politics Section of the American Political Science Association during the 2019-2020 academic year.

Dan is a frequent commentator on American and Missouri politics for both local and national media outlets, including NPR-Morning Edition, the Boston Globe, Kansas City Star, Los Angeles Times, USA Today, CBS Radio (New York and Los Angeles), NBC News, The Hill, and the New Republic.  He has written several op-eds for the St. Louis Post Dispatch and other newspapers.

Born in St. Louis, Dan grew up in Springfield and was a 1984 graduate of Springfield Catholic High School. He received his B.S. in Political Science in 1989 from Southwest Missouri State University and his Ph.D. in Political Science from Vanderbilt University in 1994. He served as an assistant professor at the University of Colorado at Colorado Springs from 1993-2000, and then as an associate professor at UCCS from 2001-2006, where for two years he served as co-chair of his department. He has also served as chair of the department at Drury. At Drury, he has won awards for Scholarship (2017), Teaching (2014), and Advising (2010). He is currently at work updating the index of presidential leverage and, in co-authored work (with Jeffrey VanDenBerg), applying the framework to President Obama’s foreign policy decision-making.