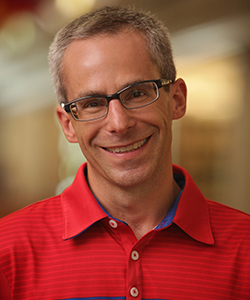 Professor of English
Director of the Honors Program

Dr. Schur has taken on a number of administrative roles at Drury, including the Director of the Interdisciplinary Studies Center (2003-2010), Founding Director of the Law & Society Program (2011-2015), and the Director of the Honors Program (2015-Present). He has won grants to participate in the Association of American Colleges and Universities (AACU) Shared Futures Project, a National Endowment for the Humanities Summer Institute, and a Fulbright German Studies Seminar. He won the 2006 Faculty Award for Liberal Learning and the 2008 Joel Weixlmann Award from the African American Review.

Dr. Schur’s scholarship focuses on racial narratives in American culture, from popular music and literature to law and ethics. He is the author of Parodies of Ownership: Hip Hop Aesthetics and Intellectual Property Law (2009) and co-editor (with Lovalerie King) of the collection of essays, African American Culture and Legal Discourse.

Schur also enjoys blogging on Drury’s Humanities Blog and has written essays for The Chronicle of Higher Education and editorials published in the Springfield News Leader. He enjoys spending time with his family and running the trails and hills of the Ozarks.