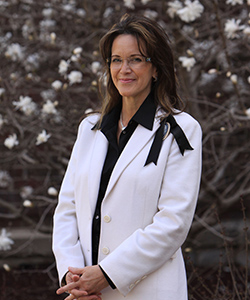 Charlyn Ingwerson began teaching at Drury in the fall of 2002, becoming a faculty member in 2008. She received her M.A. in English at Missouri State University (2002), her M.A. in Theological Studies at the Assemblies of God Theological Seminary (2007), and her Ph.D. in Comparative Literature and Cultural Studies at the University of Arkansas (2019).

Dr. Ingwerson serves the university community in a number of advisory capacities: as a member of the President’s Council on Inclusion, the International Advisory Committee, and as co-director of the Drury Scholars Program.

She has presented her critical scholarship in contemporary literature by Middle Eastern women, Israeli literature, Motherhood Studies, and women’s peace movements at a number of conferences.

Dr. Ingwerson teaches courses in comparative cultural studies, including the international section of FUSE 101, American Studies, and courses in the Middle East Studies Minor that include Israeli literature, literature in translation by Middle Eastern writers, Iranian Studies, and Studies in Nonviolence. She also regularly teaches Grammar and Style, Expository Writing, and seminars in Lyric Writing.